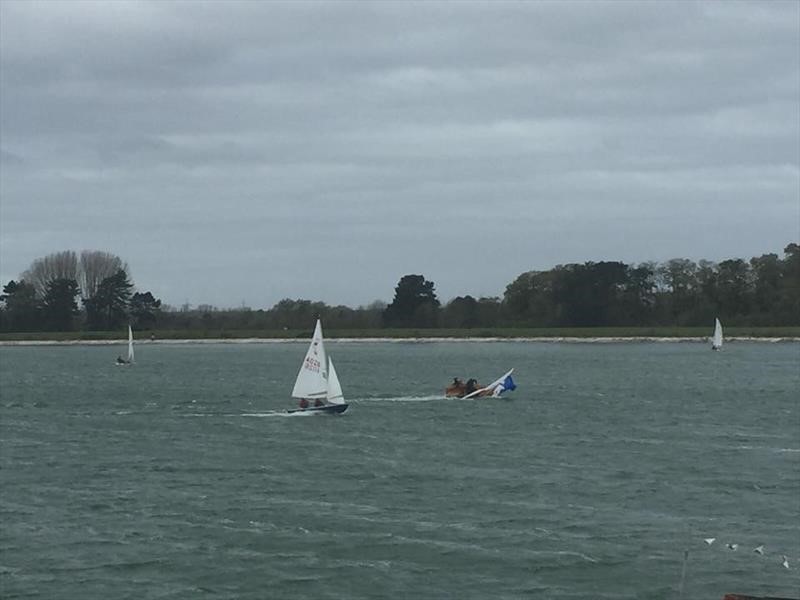 Wow, what a weekend to host the Miracle End of Season Championships! Storm Brian definitely provided the spectators with some thrilling entertainment on the water!

After the news spread that many other open events had been cancelled due to the imminent arrival of Storm Brian, there was some doubt on whether there would be any sailing for the fleet on Saturday afternoon. However as race time approached the decision was made to go ahead with the racing, whether this was a wise or foolish decision is still up for debate!

Although the underlying wind looked manageable, the direction of the wind meant that it was coming over the club house, hitting the water, and squalling in all directions! This made for extremely testing and unpredictable conditions. Out of the 8 boats 5 lined up on the slipway ready to launch. After a particularly vicious squall came through, nearly launching the boats off their trolleys, Dave and Zara made the call to take their sails down again and keep their kit dry for the day! Wayne and Angela, Simon and Mark, James and Paul, and Graham and Helen were less easily put off and headed out anyway!

Half way up the first beat Graham and Helen decided to bow out, followed just over a lap later by James and Paul. James deserves an extra well done as he hadn't helmed in those conditions before and went out for all 3 races with no capsizes!! That just left Wayne and Angela, and Simon and Mark to battle it out for the remainder of the race, with Wayne and Angela coming in first, followed by Simon and Mark. The second race of the day was cancelled, I'm not sure why…

Saturday evening was spent in the pub across the road which provided some delicious food with excellent company. The lighter weight crews used this as a great excuse to pack as much extra weight on as possible before Sunday!

The decision was made to head in and have an early lunch, hoping that the wind might reduce enough for two races to be held later. This was wishful thinking! Only 4 boats ventured out for the next race. Wayne and Angela led again, followed closely by Dave and Zara, who can't have eaten enough the night before to put sufficient weight on for those conditions! James and Paul and Simon and Mark had a great tussle all race, with Simon and Mark just taking James and Paul on the last leg. After securing their overall victory Wayne and Angela headed in, and after yet another vicious squall came through the others followed when the call was made to abandon the last race… Phew!With only three races held there were no discards which meant Wayne and Angela took the top spot, followed by Simon and Mark in second, and Dave and Zara in third.


A big thank you to Shustoke Sailing Club for hosting the event, the race officers did a great job in those conditions, plenty of rescue cover was provided to assist with the (surprisingly few!) capsizes, and the galley team provided some much needed sustenance!

The Miracles have had 10 open events this year with 13 different boats inside the top three! This just goes to show the high standard across fleet, which makes for some great racing!

Some of the top players this year:

It's been a great season thanks to the efforts of everyone travelling to the various events. Roll on next year!